CYRIL EDWIN MITCHINSON JOAD [1891-1953] AND HIS CONTRIBUTION TO PHILOSOPHY – BY RICHARD W. SYMONDS 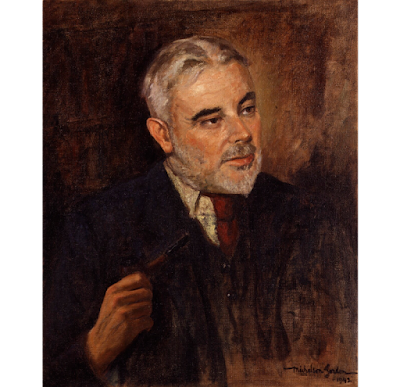 With C.E.M. Joad's new headstone being put in place at his grave in London – St John-at-Hampstead – perhaps this is a good time to outline his enduring contribution to philosophy.

1. "Cyril Joad, a philosopher who believed that philosophy should not be a mere academic speciality, but a power in everyday life", says Birkbeck's Geoffrey Thomas. He provides a greater sensitivity to the structure of arguments, to ambiguities, fallacies and inconsistencies, and has an ability to identify assumptions. Professor of Moral Philosophy JA Smith put it another way, saying to his fledgling students, "if you work hard and diligently you should be able to detect when a man is talking rot".

This philosopher saw a unity of theory (theoria) and practice (praxis) in which philosophy has a critically constructive role; working alongside, and being informed by, other disciplines embedded into everyday affairs.

2. Joad popularised philosophy, bringing the discipline down from its 'ivory towers'. His highly accessible Guide to Philosophy [1936], Guide to the Philosophy of Politics and Morals [1938], and Teach Yourself Philosophy [1944] opened up philosophy for the general reader – especially the 1944 wartime book, which is still the best book to read for any student interested in the subject for the first time. There were any number of histories of philosophy around at the time – the main form that introductions took – but they didn't exhibit Joad's presentational skills. He did philosophy a service with his 1930s/40s guides, which were models of their kind. He was the first popular writer on philosophy who divided chapters into tidy and useful sub-sections in each chapter. Joad opened up philosophy to a much wider audience in the BBC's wartime Brains Trust – the forerunner to Any Questions and Question Time. Thousands of listeners began to take an active interest in the subject. "It all depends what you mean by..." was Joad's catchphrase in the popular programme, encouraging both critical and philosophical thinking – and a sense of fun. In the Brains Trust he set an example of structured critical thinking which was new to most people at the time, encouraging listeners more on how to think rather than what to think, with many realising for the first time how to deal with a moral and intellectual problem, by dividing it into its parts. He inspired many how to think and decide for themselves on any given issues, and to question – not accept – the given thinking of others. This approach to questions was seen to be quite radical at the time, which did not please certain people in authority within the BBC – and beyond it.

3. Joad developed a philosophy of religion from the mid-40s onward, first abandoning atheism and then trying to work out a Christian philosophy. He critiqued logical positivism and attacked moral relativism, providing an alternative approach – late in life – in the form of a Christian philosophy. Birkbeck's Geoffrey Klempner thought the soul worthy of a 2019 book 'Searching for the Soul'. Joad also searched for the soul in 1952, having the audacity to think he might have found it in his last book 'The Recovery of Belief – A Restatement of Christian Philosophy'.

"I would say that his greatest contribution as a populariser of philosophy is to bring philosophy to the people; by first showing that the philosophical disquisitions have an important bearing on our everyday life; and second, by demonstrating that philosophy can and should be accessible to the masses, and not limited to the elites. His teaching at Birkbeck college, an institution committed to bringing knowledge to the working people, is a case in point. Today's philosophers and philosophy enthusiasts are greatly indebted to people like Joad who might have sparked their interest in the subject in the first place"

Joad provided the stimulus to at least two distinguished philosophical careers, those of Bede Rundle and Anthony Quinton – whose contribution to philosophy has been incalculable.

C.E.M. Joad is more circumspect as to his own contribution – his last-known published words in the posthumous 'Folly Farm' [1954]:

"Though you may with difficulty bring a reader struggling to the brink of the dark river of thought, it is a matter of almost superhuman strength and strategy to make him take the plunge"