I believe in striking while the iron is hot. Yesterday, the very last
issue of the old Philosophy Pathways was sent out to 1348 subscribers.

Michael wrote, 'In time, humanity will realize the folly of the way
they process their thoughts and the disastrous outcomes they produce
in personal health and wealth issues and in the bigger picture, on the
world level, Times are indeed changing but alas, not for the better. I
doubt if my articles will make any difference at this moment in time
but if we don't try, then who will?'

Michael has had several of his pieces feature on Philosophy Pathways.
I have always valued his contributions. We welcome all contributions
of the following format:

Subject: [title of your article] by [your name]

And that's it. What could be simpler?

As I said yesterday, posts are moderated so there will be a short
delay between the time you email your post (to
philosophypathways@lists.shef.ac.uk) and the time that it is sent out
to the list and posted on https://philosophypathways.blogspot.com.

Tim wrote, 'I have often thought that a good way forward for PP would
be to turn it into a fully-fledged online journal, with fewer issues
and some kind of collective peer-review system, if you could recruit
enough knowledgeable volunteers.'

I agree with Tim, that would have been a great idea. The problem that
I have always encountered is that that the energy and enthusiasm of
volunteers ebbs and flows with time. The only person whose whose work
ethic I can count on one hundred per cent is myself. And that did work
for a while. What I realized in time was that peer review, if it is to
have any meaning, must be done by more than one person.

Finally, I received this question from Andrew: 'What would
philosophypathways as announcement list do for the philosophical
community that Philos-L and Philosop do not do?'

An excellent question, Andrew. Let me start with the things that
philosophypathways will NOT do. One of the main things featured on
Philos-L and Philosop are job vacancies, conferences, and calls for
contributions to journals. These will be of little interest to our
current, mainly non-academic readership. On the other hand, what they
are interested in are writings by independent philosophers or
philosophers outside the academy which are accessible to the general
reader -- the kind of thing that would not be likely to feature on
Philos-L or Philosop.

What else? Philosophy meetups, philosophy in pubs, all kinds of groups
that get together to talk about their passion would surely welcome an
opportunity to advertise their meetings. And online forums as well, of
course.

-- Look out for more posts from me, and, hopefully, from other
subscribers. Once again, here is the email address:

I look forward to hearing from you!

Hello philosophers, Recently, a blog has been set up with a few posts. This blog will be an archive of summaries of philosophical works. ... 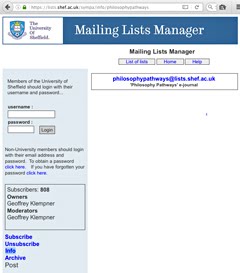 Subscribe or unsubscribe to the Pathways e-List on this page